Skip to content
Hey there! Since I share nutrition & self-sufficiency tips, naturally my content may contain affiliate links for products that I use and love. If you purchase anything through my links (at no additional cost to you!), I’ll make a small profit, which allows me to keep sharing content with you awesome people.
FacebookPinTweetEmailLinkedInPrint

Are you unsure when to use tallow vs lard, and if saturated fat really is ok to use?

As a traditionally-trained dietitian and child of the 80’s where saturated fat was universally shamed, I understand the hesitancy!

Tallow and lard have been common ingredients in homestead kitchens for centuries and they are starting to make a big comeback!

In this comprehensive 2-part series, we’ll tackle the saturated fat controversy and later, break down the research behind the benefits of lard vs tallow so that you can feel safe using them. We’ll also talk about their differences and which scenarios they are best used in so that you can be confident in incorporating them.

Before we even get into tallow vs lard, I think we need to tackle the elephant in the room: saturated fat. 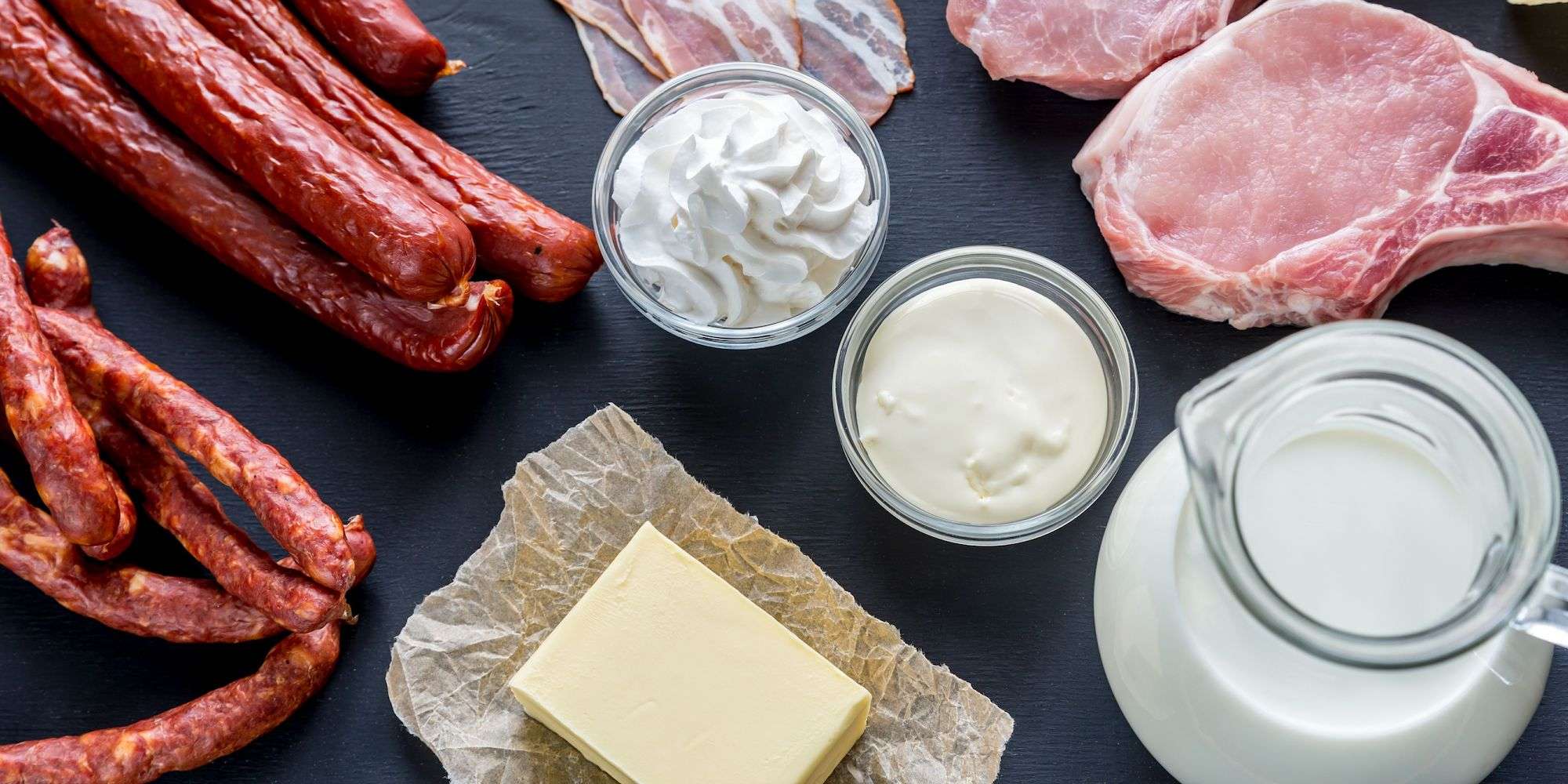 The History Behind It All

Saturated fat has been demonized as the cause of heart disease since the 1950’s, starting with the release of the Seven Countries Study by Ancel Keys. This movement was further perpetuated by heavy marketing from the profitable seed oil industry.

Did you know that Proctor & Gamble (the creators of Crisco) “donated” 1.5 million dollars (which would be 30 million today!) to a group of cardiologists on the American Heart Association board in the 1940s? Surprise, surprise. Shortly after, they were quick to promote these processed oils as being more “heart healthy” (source).

So, we were told to replace butter with margarine, lard with Crisco, and tallow with vegetable oil as these are “heart healthy” options, and it definitely happened (Ramsden, 2010). 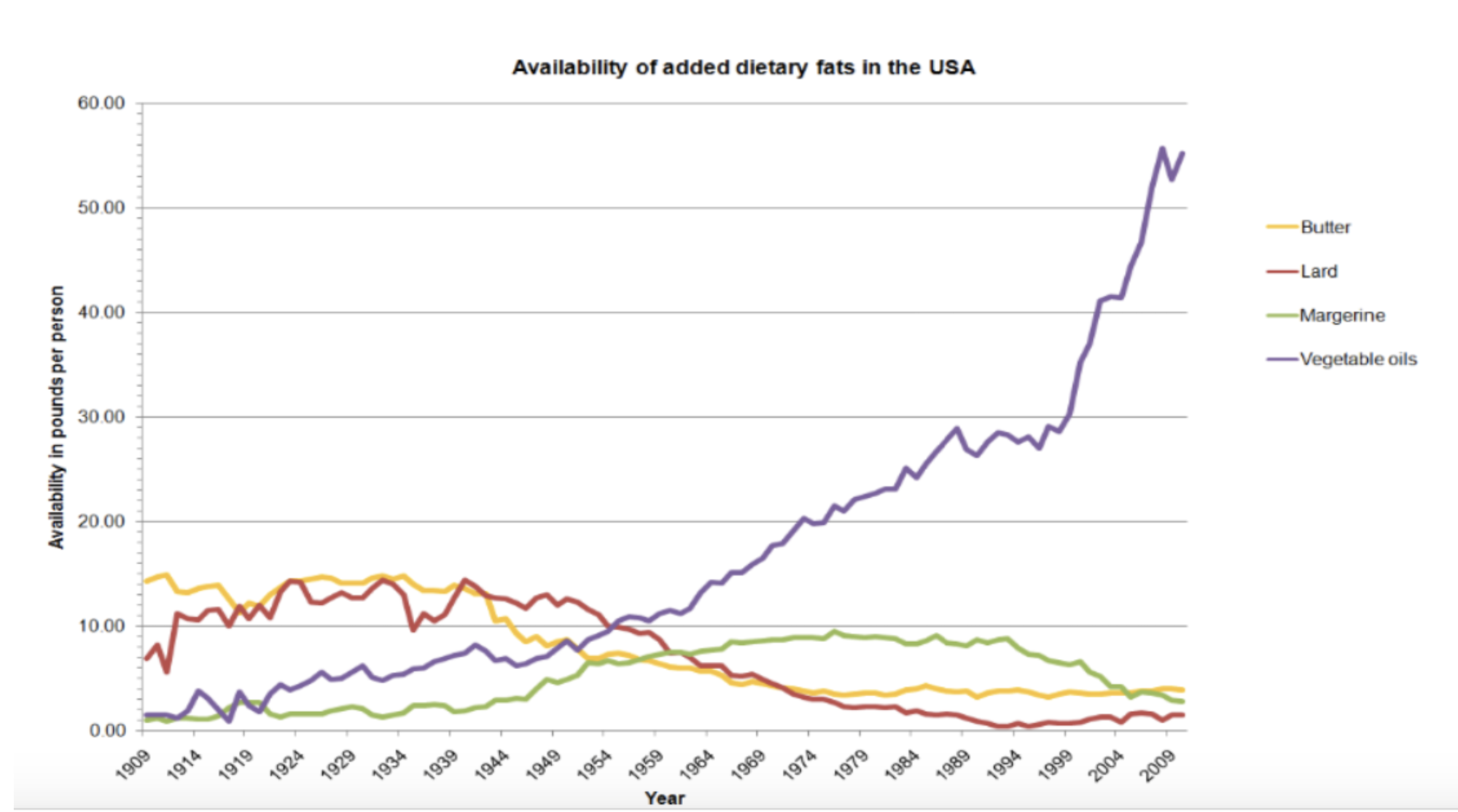 Check the ingredients list of nearly any product you have in your cupboard; it likely contains some type of highly-processed vegetable oil. So, are we healthier like they told us we would be? HELL. NO.

The truth eventually came out that Keys’ study was highly flawed. Data was “cherry picked” and countries were selected based on desired outcome. TWENTY-TWO countries had data that was thrown out and only 7 countries were included. France was purposely excluded and data from Greece was inaccurate due to lent.

This isn’t the only study that had flawed data, either! You can read more about the fascinating history of the fat controversy in the highly informative Weston A. Price article The Skinny on Fats. and Chris Kresser’s article How Industrial Seed Oils are Making Us Sick. They are definitely worth the read!

In 2013, a group of researchers re-evaluated some recovered data from the Sydney Diet Heart Study (1966-1973) and the results are shocking. This study involved 458 men who were randomized to replace saturated fats with omega 6 linoleic acid (safflower oil and margarine) and compared them to a control group who received no specific dietary instruction.

The intervention group that replaced their saturated fat intake with safflower oil & margarine had significantly higher rates of death from all causes, cardiovascular disease, coronary heart disease. WOW. Even despite the intervention group experiencing a significant reduction in their blood cholesterol levels, too! I hope you’re paying attention to this… cholesterol isn’t everything.

What else are we missing?

I believe that a lot of the issue behind this controversy is that we have mostly been looking at studies that are based in the United States. Where is the vast majority of our population getting their fat intake?

We have become so far removed from the origins of how our ancestors have been consuming fat for centuries that it’s not even a fair comparison. It’s not hard to believe that health outcomes from eating processed and pro-inflammatory fats are going to be drastically different from those from eating home-rendered tallow from a healthy cow that spent its life out on pasture. 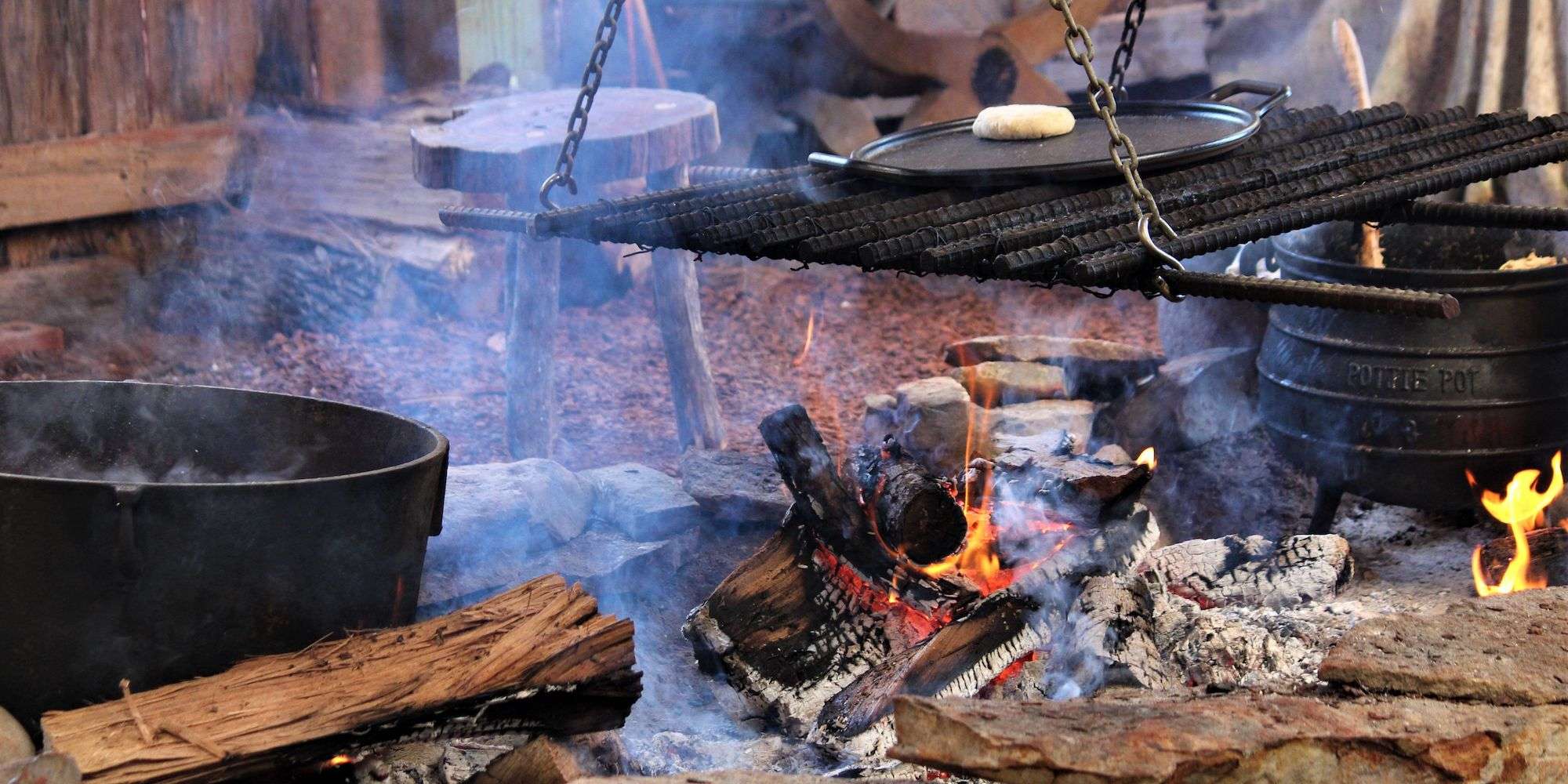 So what should we do?

We need to look at studies that are utilizing the right population. A population that is reflective of how our ancestors lived. How we were meant to live.

Dehghan and colleagues set out to do exactly that by evaluating health outcomes in 18 different rural countries in 5 different continents. Here’s what they found: 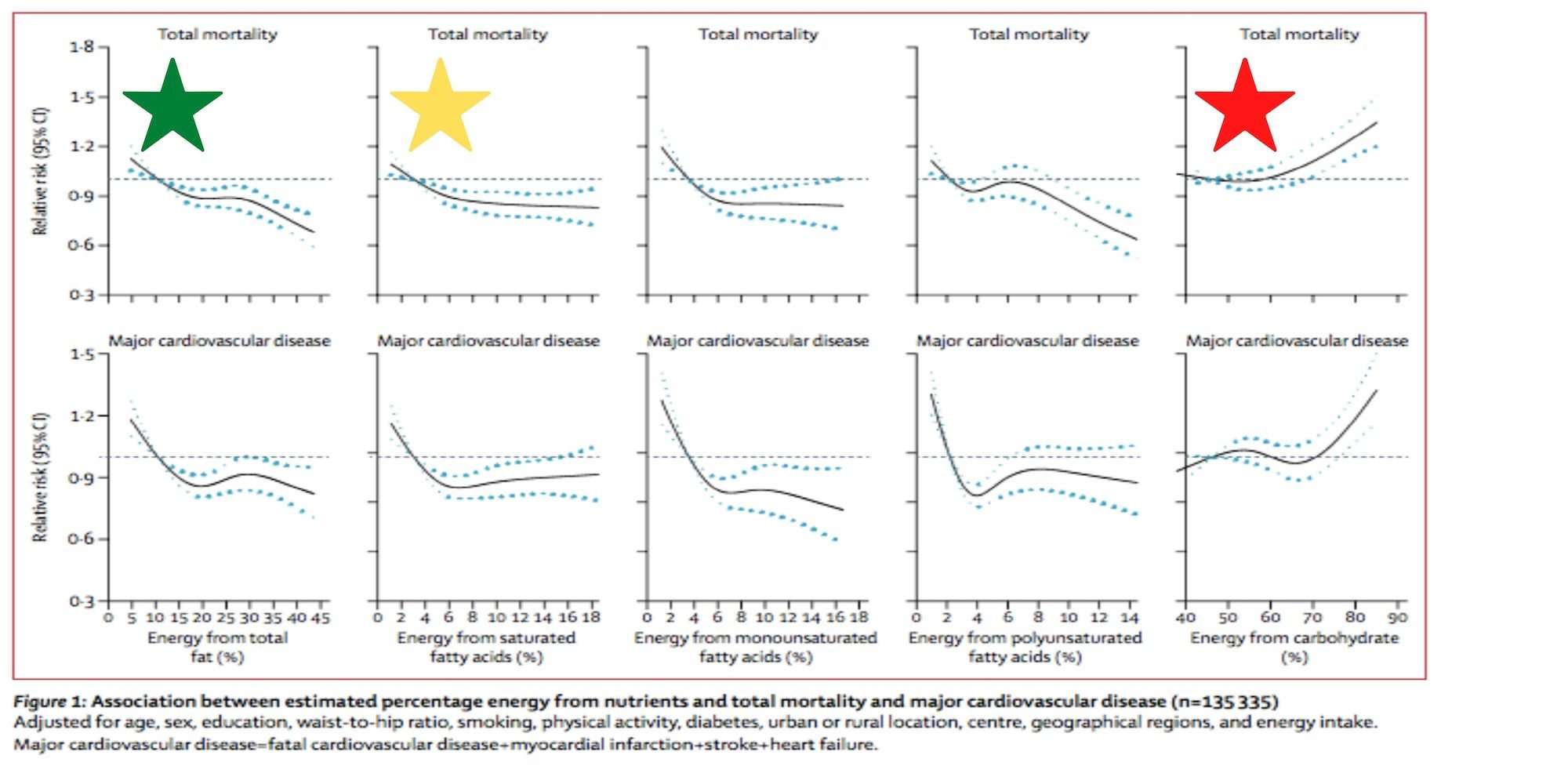 Here’s one more just for kicks (Grasgruber, 2018). This study pulled data from 158 countries and they found that as intake of carbohydrates from cereals (CC) increased, so did CVD mortality in women (graph on left). Wheat was noted to have a particularly detrimental effect on health outcomes. Then, as total fat and animal protein intake increased, CVD mortality in women decreased (graph on right). 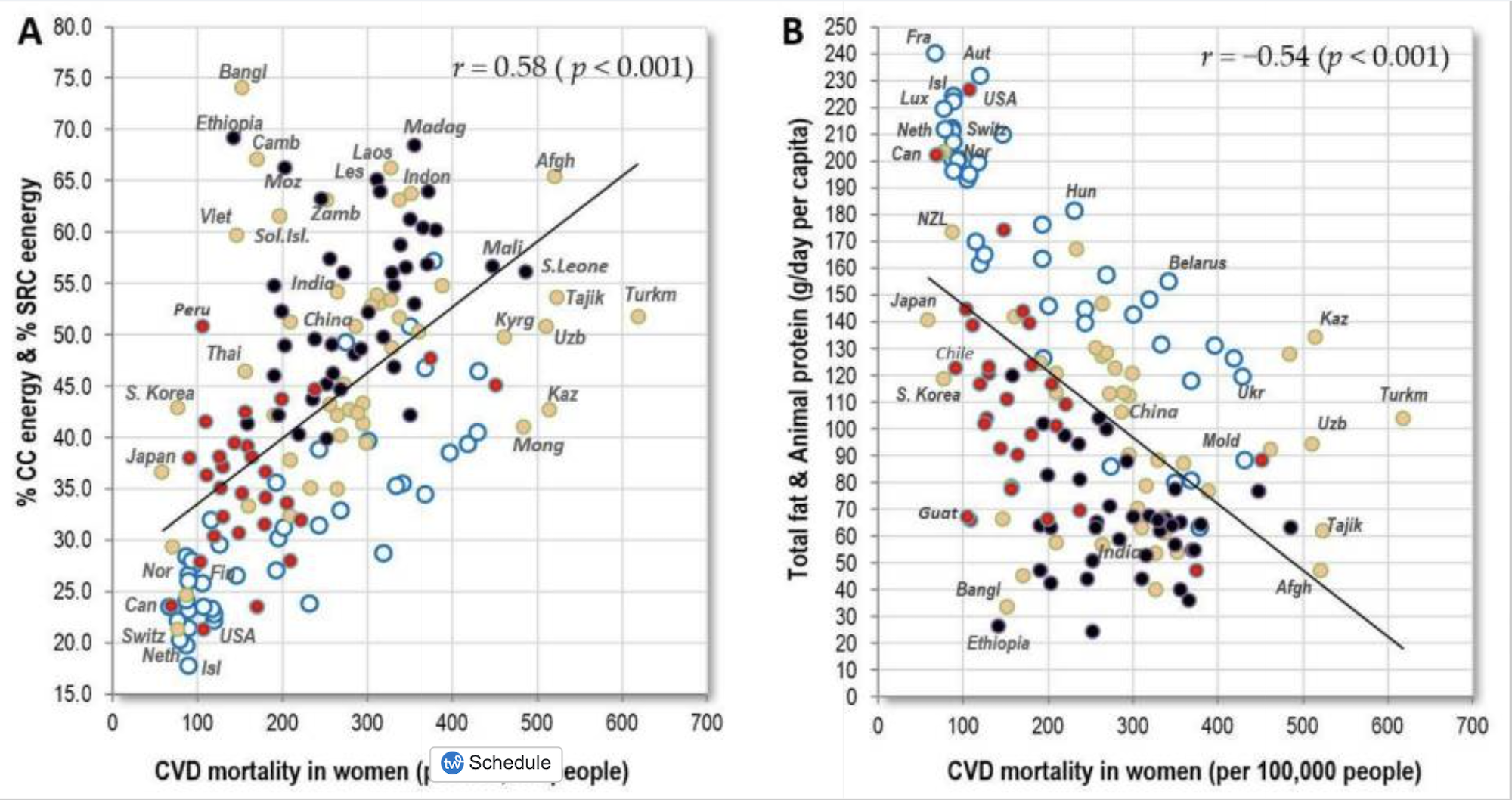 It’s time to get off of the gluten, refined cereal and highly-processed vegetable oil train and get back to REAL FOOD.

Types of Fat and Oxidation

Our chat about saturated fats wouldn’t be complete if we didn’t touch on what happens when fat is heated while cooking.

Saturated fats are stable when heated, thanks to their absence of double bonds. See how straight the chemical structure is? The fatty acids stack neatly together, which is why it is solid at room temperature. They naturally have a high smoke point of 350-450 degrees.

Unsaturated fats have one or more double-bonds, which creates a “kink” in their structure. This causes oils to be liquid at room temperature (AKA less stable). When unsaturated fats are exposed to high heat, their double bonds break. This breakage results in rapid oxidation (release of free radicals). Free radicals are highly damaging to the human body and can cause inflammation, premature aging, plus cellular membrane, mitochondrial and DNA damage (Wickens, 2001).

Please put the bottle down. A good rule of thumb is to only cook with fats that are solid at room temperature (high in saturated fats): grass-fed ghee, grass-fed tallow, pasture-raised lard, and cold-pressed & unrefined coconut oil or palm fruit oil. Save your cold-pressed & unrefined olive oil for low-heat applications such as salad dressings, dips or drizzling on pre-cooked food.

Did you notice that I mentioned cold-pressed & unrefined a lot? That’s because modern extraction of oils is a far cry from what our ancestors used, which was a simple stone press.

Most of the oils that you’ll find on the market today are highly processed by way of massive pressure and high heat to extract the highest yield possible.

This exposure to high-heat not only produces free-radicals, but it denatures the naturally occurring vitamin E (an antioxidant). In its place, manufacturers add their own synthetic preservatives (BHA, BHT and TBHQ), which have endocrine-disrupting properties (Pop, 2013). To top it all off, the oil is also often treated with a solvent (typically hexane) and bleached. Lastly, these cheap oils are often stored in a plastic bottle, which then further leaches into the oil. Sounds great, huh? 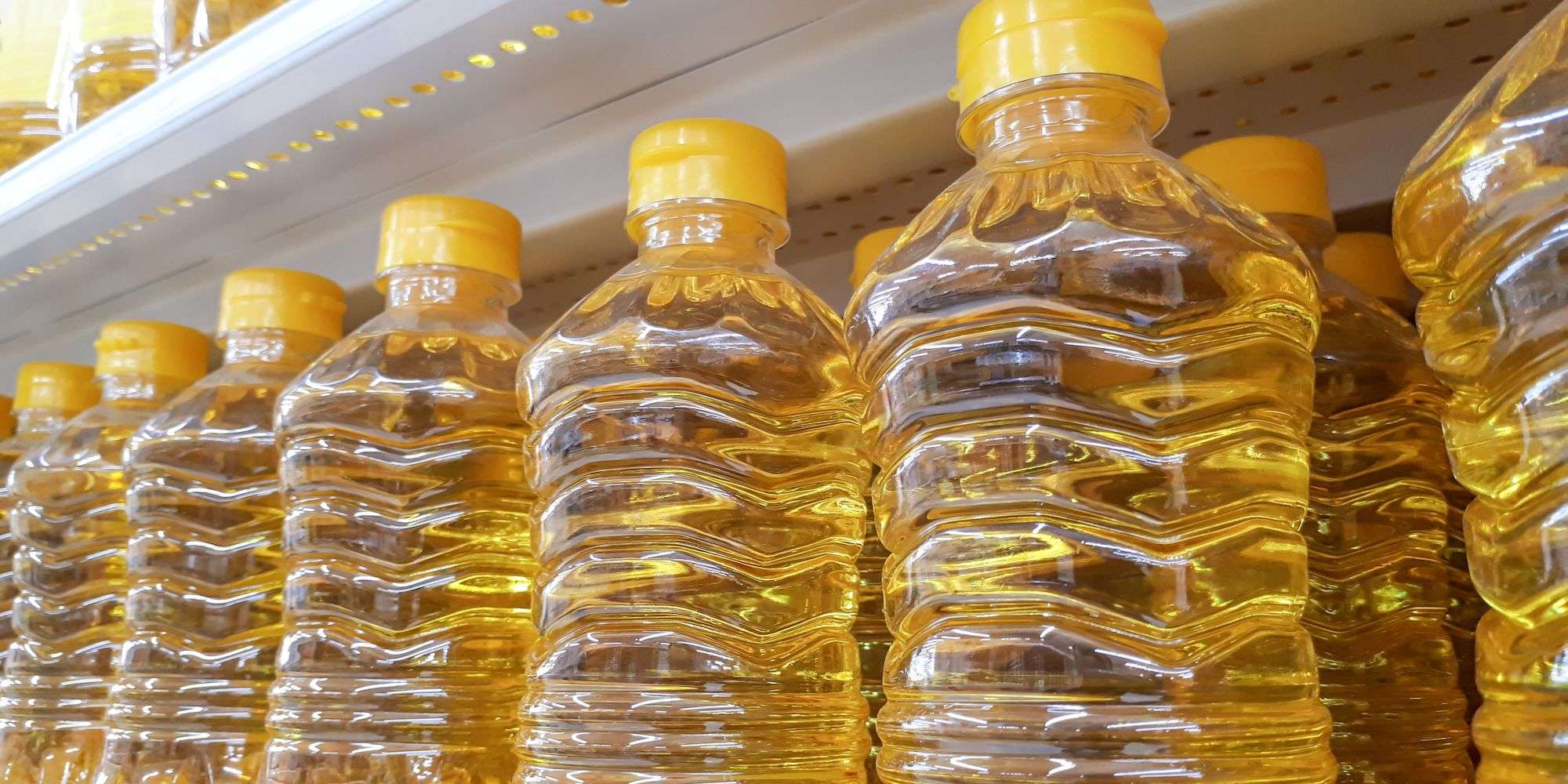 Why does the industrial seed oil company go through such lengths? Long shelf-life = higher profits.

These companies are smart in their marketing by stating claims that their oils are good for “high heat cooking.” Sure, your refined olive oil now has a “smoke point” of 425 degrees, however, it is already oxidized from processing and then it’ll get oxidized some more by cooking your meal.

It’s also important to note that an oil’s smoke point is far beyond the point where the oil starts to oxidize and produce damaging free radicals.

What about avocado oil?

Avocado oil has become a popular choice in the past few years because it’s “safe for high-heat cooking.” Yes, it has a high smoke point, but do you know why? It’s also highly processed. YUP. Try looking for a cold-pressed, unrefined avocado oil and you’ll have a hard time finding one.

What happens when you cut open a whole avocado? It turns brown. The same thing would happen to the oil, so it is highly refined and bleached to keep it shelf-stable.

Ok, it’s time for me to get off of my soapbox and switch over to lard vs tallow!

I know I promised to talk about it, but I felt like this was a big topic that I had to tackle first. If you aren’t comfortable incorporating saturated fats into your diet, then deciding between lard and tallow isn’t even on the table.

Am I saying that you should be eating lard or butter by the spoonful? Absolutely not. As with everything, moderation and balance is key. Choosing the right fat isn’t the only key to health, either. Getting adequate fruits and vegetables, clean water, exercise, quality sleep, and much more are all important pieces to maximizing our health!

Stay tuned for part 2 where we actually get down to business on comparing lard vs tallow and help you decide which one you should be using!

Did you learn something new?? I’d love to hear it! Share with us below 🙂 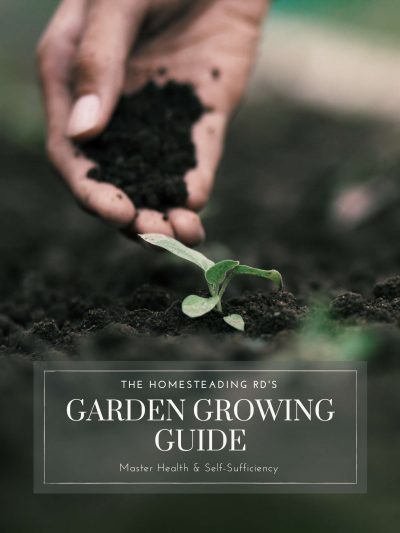 Achieve Your Best Harvest Yet!​

I’ve been using my Garden Growing Guide for years and I know that you’ll love it, too. It’s fully customizable to your growing zone and can be printed or used digitally. Happy Gardening!

14 thoughts on “Tallow and Lard: The Saturated Fat Controversy”

Scroll to Top
Share this ArticleLike this article? Email it to a friend!
Email sent!